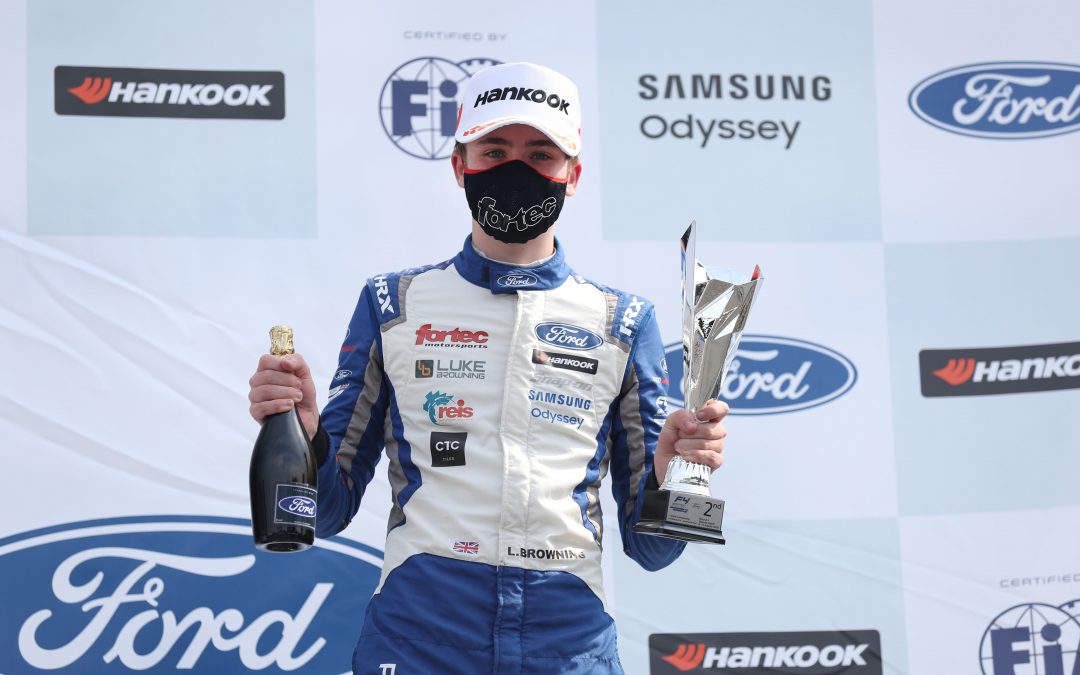 Rising star Luke Browning maintained his early season championship challenge with a brace of podium finishes as the F4 British Championship certified by FIA, powered by Ford EcoBoost headed for Brands Hatch GP for the second meeting of the season.

The Cheshire racer made the voyage south to the famous Kent circuit on the back of a double podium at Donington Park in what was his first race meeting with the Fortec Motorsport team, and with hopes high of pushing for a first win of the campaign.

After a somewhat troubled Friday test day, where mechanical issues limited his time on track, Luke qualified third on the grid for the opening race of the weekend, with his second best time in the session being good enough to ensure he would start race three from fifth spot.

Battling ahead of Alex Connor with an impressive move on the opening lap, Luke ran in second spot behind Zak O’Sullivan but would struggle to match his rival for pace in the early stages. However, as the race wore on in sweltering conditions, Luke started to eat into O’Sullivan’s advantage and posted the fastest lap as he closed in on the car ahead.

Unable to find a way through, Luke secured second spot for his third podium finish of the campaign.

Fifth on the reverse grid for race two, Luke emerged from a race long battle with Connor to take solid points for fourth place, and headed into race three – live on ITV4 – aware of the challenge ahead given he was again starting from the third row of the grid.

A fine start saw Luke get ahead of team-mate Roberto Faria and then Nico Pino on the opening lap before he then dispatched Connor on lap two to move into second spot.

As in race one, Luke then chased down O’Sullivan in the fight for the lead and put the Carlin man under huge pressure before taking the flag in second spot.

With four podium finishes from six starts, Luke remains second in the standings ahead of round three on home soil at Oulton Park in two weeks time, where his focus will be on trying to close the gap to O’Sullivan out front.

“I think the weekend stemmed from qualifying and that really impacted on how the three races panned out,” he said. “The pace was there in the car and we were so quick but you just can’t overtake round here, particularly when you are on the GP loop. Look at all three races; the person who was on pole was the person who won.

“When it is so warm and you get into the dirty air behind another car, it’s really tricky and you have to drop back into clear air and then try again. I pushed really hard to get the win this weekend but it wasn’t to be, although at this stage of the season, the points are the most important thing.

“Building a title challenge is all about consistency and four podium finishes from six races is a good start. Oulton Park is next which is my home circuit and I’ll be pushing hard to open my win account for the season there.”