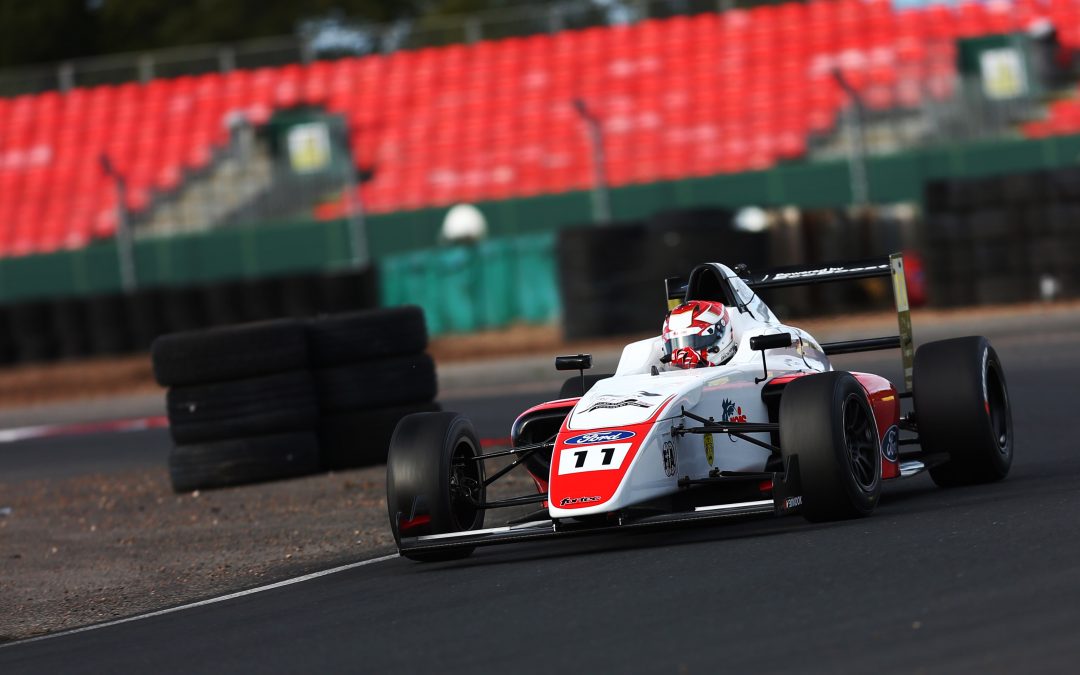 Rising star Luke Browning added to his impressive tally of podium finishes with a third place finish in the latest rounds of the F4 British Championship certified by FIA – powered by Ford EcoBoost season at Croft.

Luke topped the times in a damp opening practice session on Friday at the North Yorkshire circuit and was amongst the pace setters in the second session before a number of his rivals popped in quick laps late on as the circuit dried out.

The opening race would be a challenging affair for Luke after a trip across the gravel at Clervaux, the opening right hander, saw him drop down the order to end the opening lap in sixth place.

Luke would spend the whole race tucked up behind the car of Roman Bilinski but was unable to make a move for position and had to settle for a sixth place finish as a result.

With the Croft meeting featuring just two races rather than the usual three, Luke headed into race two keen to try and add to his impressive tally of silverware this season and he held second off the line before a safety car period caused by Bilinski going off at turn one.

After the restart, Luke went wheel-to-wheel with O’Sullivan before his rival edged ahead into second spot, and Luke would ultimately end up with a third place finish – and a new lap record – to end the weekend 13 points clear in the title race with six races left to run.

“I performed very well in qualifying, my theoretical time was two tenths up the road and we should have been on double pole pretty comfortably,” he said. “I made it difficult for myself in that sense because if I’d have started first I’d have found it a lot easier just to drive off.

“In race one I made a mistake and went straight on at the first corner, and I managed to recover into sixth but it just didn’t really go to plan. Race two was a solid race, we’ve got the lap record around there now which is pretty cool. If we’d be on pole it’d have been a different story.

“We need to have some more and more positive rounds now, we’ve had a couple of bad rounds, the last three just haven’t been very strong for whatever reason. I knew they weren’t going to be the most strong, but Snetterton and Brands are two of my strongest tracks – I really do expect to hopefully be on pole there and drive off into the distance!

“That would be lovely, but that’s not always how racing works out. I know our pace is going to be fast, the car feels quick and if everything comes together I guess we’ll aim for the triple again!”