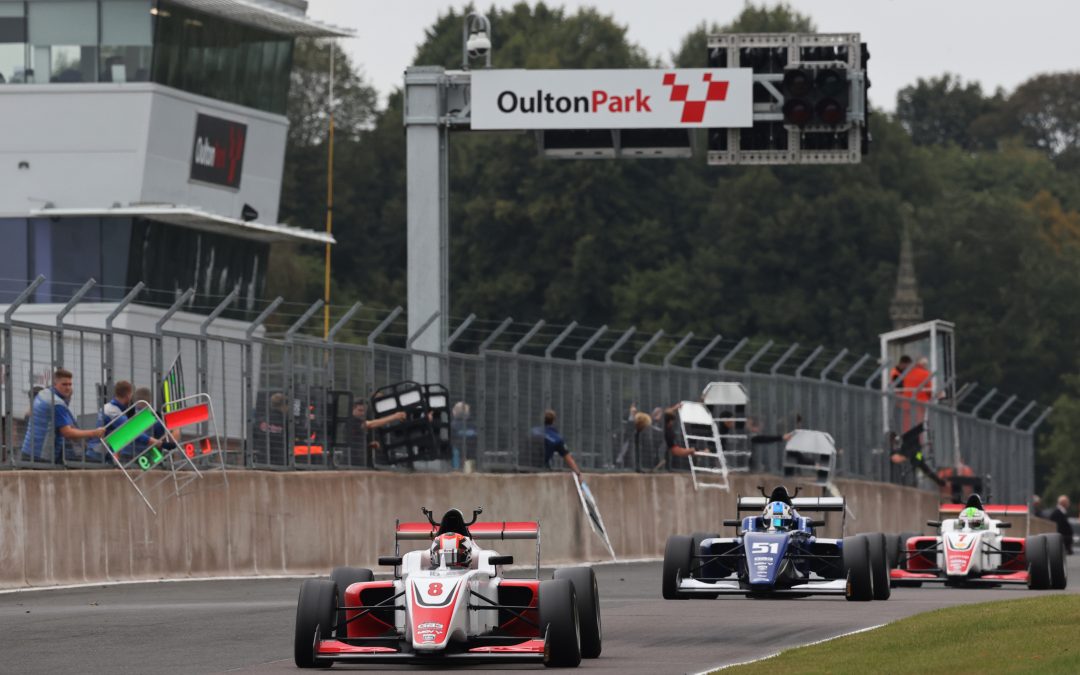 Rising star Luke Browning enjoyed a successful return to action on British soil with victory on his guest outing in the GB3 Championship in association with the BRDC.

Luke rejoined Fortec Motorsport – the team that carried him to the British F4 title last season – for the latest rounds of the GB3 campaign, which took place at his home circuit of Oulton Park.

Despite the fact that he had only limited experience of the GB3 car from testing over the winter, Luke was up to speed from the outset in pre-event testing, and went into qualifying confident of pushing towards the sharp end of the grid.

The opening race would see Luke run in second place throughout as he kicked off the weekend with a podium finish, only to then lose the result when he was excluded for a non performance-enhancing technical infringement.

Keen to make amends in race two, Luke produced a stunning move on championship leader Zak O’Sullivan at the start – going round the outside at Old Hall to secure the inside line for the run to Cascades, where he slid into the lead.

Luke would lead the way through to the tenth lap when O’Sullivan tried to get ahead at Hislops, with his rival running off-track when they went wheel-to-wheel into the corner. Luke was able to continue in the lead with Roberto Faria behind in second, but a tap from his team-mate then resulted in Luke spinning going through turn one.

Avoiding the barriers, Luke rejoined the field but the action was then halted as a result of the stricken cars on both Faria and O’Sullivan on the side of the circuit.

As per championship regulations, the result would be taken back a lap and was confirmed as at the end of lap ten, meaning Luke was declared as the race winner.

Heavy rain arrived before the start of race three and a fine start saw Luke rocket up six places into the top ten within half a lap.

However, any hope Luke had of a second win of weekend would be ended on the exit of the hairpin when contact from Bart Horsten tipped him into a spin, with the resultant damage to a rear wheel forcing Luke back into the pits to retire.

“It was great to rejoin the Fortec family for a weekend at Oulton Park; it was like I’d never been away!” he said. “There was no pressure on me this weekend, so to come in with only a single day of testing and secure a win is really pleasing.

“I certainly think we deserved more from the other two races as the pace across the whole weekend was really strong, and credit has to go to the team for providing me with such a great car.

“After taking the win, I was really looking forward to race three as I love racing in the wet and I got a mega start to jump into the top ten – even though the spray meant people watching on couldn’t really see it!

“It’s a shame that some contact put me out because even though it was a reverse grid, I definitely think we’d have been right in the mix at the front!”

Luke now turns his focus back to the ADAC F4 Championship, with his campaign in Germany getting back underway this weekend at Hockenheim.