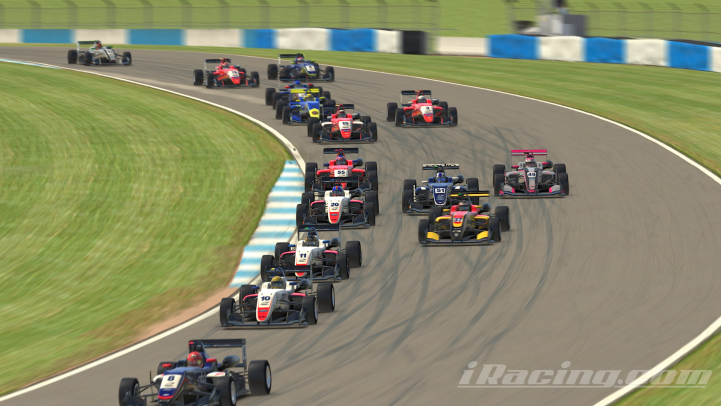 With his on-track action still at a standstill as a result of the COVID-19 pandemic, rising star Luke Browning gave an indication of what is to come when the new British F4 season finally gets underway by taking the early advantage in the iRacing equivalent at Donington Park.

The new British F4 iRacing Trophy has been set up to fill the void left by the postponement of the first half of the season, with Luke joining a number of his 2020 rivals in signing up to take part in the virtual series, which sees drivers running in identical F3-spec machines.

Luke secured pole position in qualifying ahead of his Fortec Motorsport team-mate Chris Lulham, but slipped back to second on the opening lap when Lulham made a move for the lead at McLeans.

Luke would keep his team-mate honest through the opening half of the race, but a spin just after the half-way point saw him slip back to fourth and meant he just missed out on the podium places.

Race two provided an additional challenge by virtue of a reverse grid that left Luke starting in eighth place.

Quickly into the top three, Luke got ahead of Ollie Bearman into second and then chased down former British F4 champion Kiern Jewiss before launching a move for the lead at McLeans. Once ahead, Luke pulled out a lead of more than four seconds as he cruised to victory and the early points lead after race one winner Lulham crashed early on.

“That race was a little bit less exciting, strangely, for me than the first one!” Luke said. “Once I got in front, I could chill out then. It was really enjoyable, it’s great to be able to do this with everyone – I’m racing some names I’ve not actually raced on track before, so that’s good.

“I think I’ve got the world record on iRacing around Brands Indy in this F3 car, so hopefully I can carry that form into the next race as well, it’s looking quite promising.”