Double pole and solid points for Luke at Thruxton 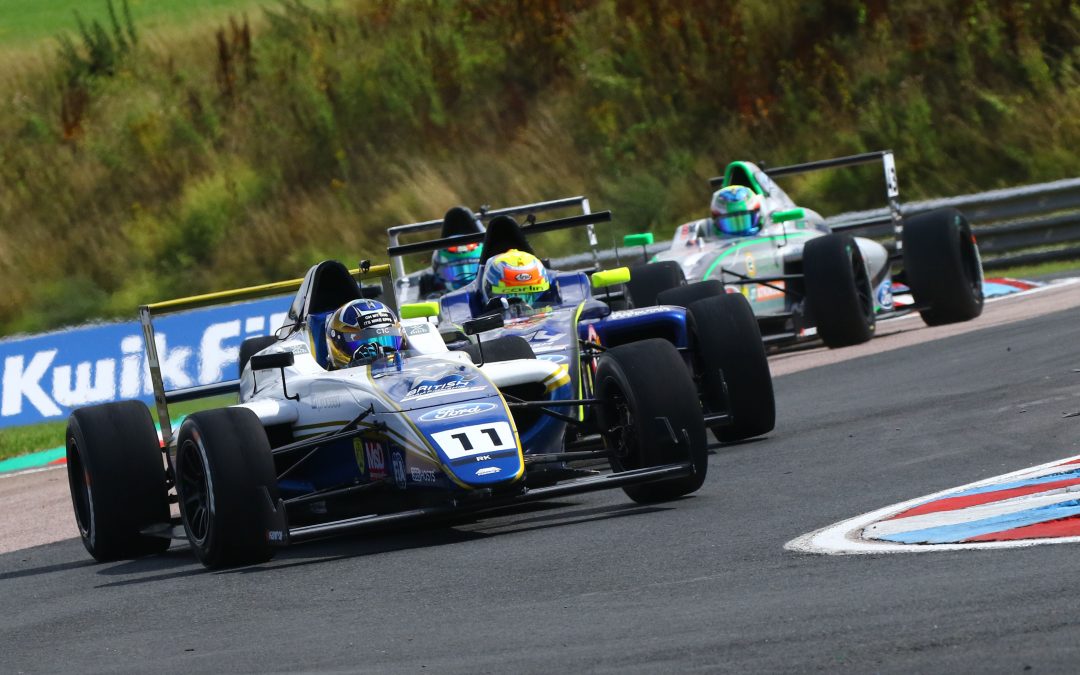 Luke Browning was able to celebrate a double pole position and a brace of top four finishes from the latest rounds of the F4 British Championship certified by FIA, powered by Ford EcoBoost at Thruxton.

Luke headed to the quickest circuit on the calendar hoping to try and replicate the race winning performance he had shown in the third meeting of the season at the same circuit back in May.

A storming performance in qualifying on Saturday morning, which was held on a drying circuit after rain through Friday and overnight, saw the Cheshire-based youngster secure pole position for the first time in the series.

Not only was his fastest lap good enough to snare pole for race one, his second best time also ensured a place at the head of the field for the final race of the weekend in front of the live ITV4 cameras.

Unable to quite match his qualifying pace when the opening race of the weekend kicked off, Luke slipped back to second behind Carter Williams at the start and would eventually be shuffled back to fifth spot by the finish.

However, a penalty for Zane Maloney ahead meant Luke was promoted back into fourth spot in the classified results.

With the partially reversed grid putting him third on the grid for race two, Luke duly repeated his result from earlier in the day as he again crossed the line in fifth before being promoted into fourth by a penalty elsewhere.

The final race of the weekend started with Luke once again on pole position although he would lose out to Williams when the lights went out and slipped back to second place.

Despite the fact that a gearbox issue was hampering his challenge, Luke battled hard to remain in contention for a place on the podium before being hit in the rear on the run through Village, tipping his car into a high-speed spin from which he was lucky to recover.

Dropping down the order as a result, Luke had to settle for ninth place at the finish.

“Qualifying was really good, and I feel that we really found the sweet spot in tricky conditions,” he said. “To get a double pole was a fantastic start to the weekend but the races proved to be difficult.

“When the circuit was dry, we didn’t quite have the pace that we needed to run right at the front of the pack which was a shame but it wasn’t through any fault of our own. The straight-line speed just wasn’t quite there in the first two races and then there was an issue with the gearbox in race three, although being turned round at one of the quickest parts of the lap didn’t help either.

“Hopefully we can come back fighting next time out when we get to Knockhill. It’s a circuit that I love, and I’m confident that we’ll be strong and fighting at the sharp end of the grid.”