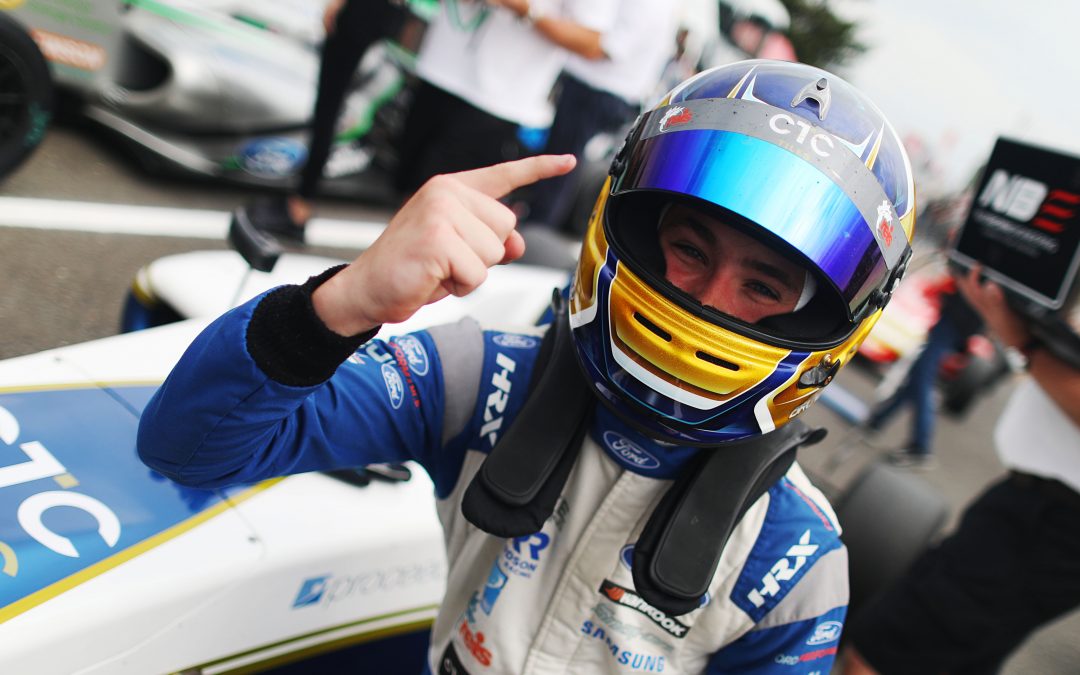 Luke Browning battled from the back of the grid to secure a stunning podium finish from the latest rounds of the F4 British Championship certified by FIA, powered by Ford EcoBoost at Snetterton.

Rising star Luke made the long trip to Norfolk to bounce back from a tough run of form in the two rounds prior to the series’ traditional summer break, where he had been unable to add to an early season run of success.

Qualifying proved to be a challenging affair for Luke, with a post-session penalty seeing him stripped of all his times, leaving him consigned to the back of the grid for the opening 20 minute race of the weekend.

Making up places on lap one when the action kicked off, Luke quickly vaulted up into the top ten and would remain in tenth place for the entire eleven lap encounter to secure a points finish.

Starting race two from the same position – with the grid determined by the finishing positions of race one – Luke was hoping to benefit from a number of changes that were made to the car overnight.

A strong start saw Luke climb up to eighth on the opening lap and by the end of lap three, the Cheshire racer found himself up inside the top six and with a realistic chance of fighting for the podium as the fastest man on track.

Battling into fifth at the start of lap four, Luke avoided a clash between Bart Horsten and Zane Maloney at the final corner to move into third and when Josh Skelton and Sebastian Alvarez then came together whilst dicing for position at the start of the fifth lap, Luke was able to sneak through into the lead.

Maintaining the strong pace that had allowed him to work his way through the order, Luke extended his advantage at the front to more than four seconds as he secured a stunning third victory of the campaign.

However, there was drama post-race when Luke was handed a ten second time penalty for a false start, which demoted him back to third place.

The issues in qualifying meant Luke found himself at the back of the grid again for race three, and his hopes of repeating his charge through the field would end early when contact with Reema Juffali damaged the front wing on his car.

Called into the pits for a replacement, Luke dropped to the back of the field and would end up just outside the points in eleventh place.

Next up for Luke is a return to Thruxton in Hampshire in two weeks time; a circuit where he secured one of his two race wins earlier in the season.

“This could have been one of those weekends after qualifying but to come away from it with a podium finish is fantastic,” he said. “We’ve had a bit of a tough run in recent meetings but the whole team has worked hard and we have made some big changes this weekend that have really helped.

“Having got what we could from race one, the team made some changes overnight and it was so much better on Sunday. Race two was great and we showed really strong pace to work our way forwards, and then it was a case of taking advantage of all the chaos as others made mistakes.

“It was unfortunate to then get a penalty although at least we were still rewarded with some silverware. To be honest, I think we could have done it again in race three but Juffali moved over on me at the start and it damaged the wing, which meant I had to pit and all chance of a result was gone.

“Going to Thruxton next, we’ll be starting in a good place and hopefully we can try and repeat our victory from earlier in the year.”