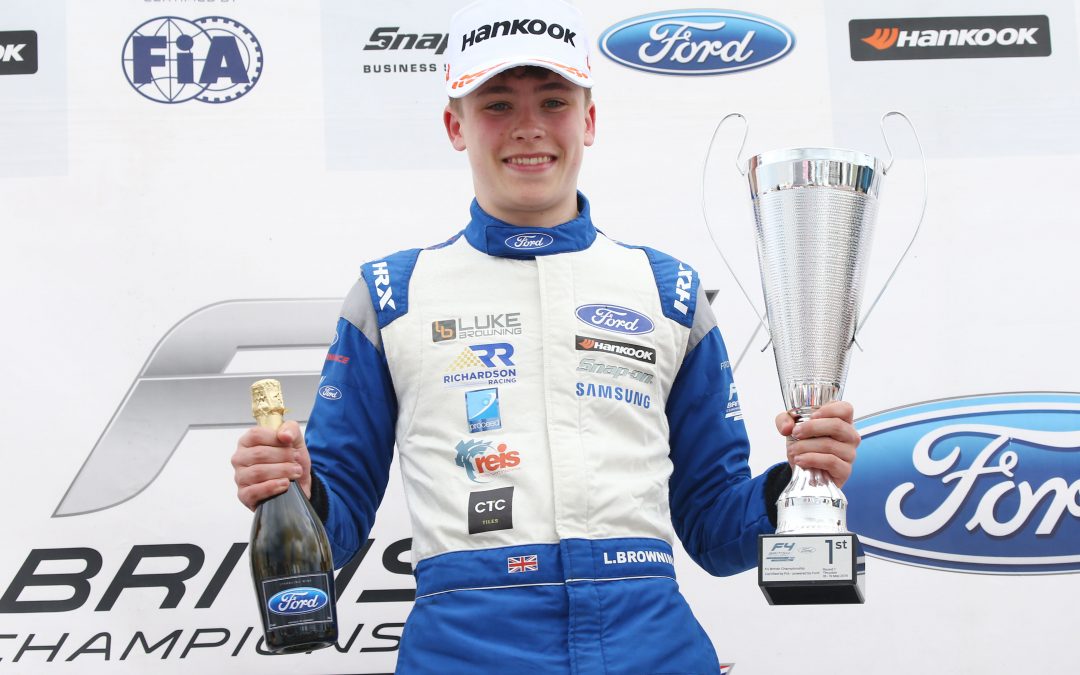 Luke Browning produced a battling performance on track at Thruxton to secure a second victory of the F4 British Championship certified by FIA – powered by Ford EcoBoost season.

Luke made the trip to Hampshire hoping to add to the silverware he had secured in the opening two meetings of the year, with the rising star from Cheshire having followed up a pair of top three finishes at Brands Hatch – including a maiden race win – with another podium at Donington Park.

Having been one of the drivers on the grid to fall foul of track limits at the final chicane during qualifying, Luke secured sixth place on the grid for the opening race of the Thruxton weekend, with his best time being just two tenths of a second off pole on the highly competitive grid.

When the lights went out, Luke was a man on a mission however and a storming opening lap saw him rocket through to second place as the field streamed into the final chicane for the first time.

Luke then made his move for the lead at the same place on lap two just before the Safety Car was deployed to allow marshals to move two stricken cars from the circuit.

Managing the restart to perfection, Luke was able to maintain his position through the remainder of the 20 minute long encounter to take his second win of the year.

Fifth on the reverse grid for race two, Luke quickly moved into fourth at the start and then slipped up the inside of Sebastian Alvarez at Goodwood on lap two.

Making a move for second at the end of lap five, Luke was squeezed towards the pitwall crossing the line, and the loss of momentum saw him come under attack into the complex where Tommy Foster ran into the rear of his car; damaging the rear wing which would then become detached completely.

Despite a huge loss of downforce, Luke somehow wrestled the car round the fastest circuit in the UK for more than half the race before being called into the pits by officials six laps later for a replacement rear wing.

Dropping off the lead lap as a result, Luke missed out on points in twelfth place.

Starting the final race of the weekend from seventh on the grid, Luke quickly moved forwards into the top six but an unfortunate spin at the complex on lap five resulted in him dropping down to twelfth place.

From there, Luke battled back up to ninth place by the finish to secure two more championship points and he heads away from the weekend sitting fifth in the standings.

“It’s unfortunate that we didn’t get more from the weekend as a whole, but I’m delighted to have taken another win and know that I could well have had two if luck hadn’t gone against me,” he said.

“After qualifying, I knew we had a car that was capable of running at the front and to come through to win in race one like that was brilliant and showed that we can be a force to be reckoned with in all conditions after the win in the wet at Brands Hatch.

“I’m confident that we could have doubled up in race two had it not been for the contact that broke the rear wing but there was nothing I could do about it. Going into the complex, I just got hit from behind and it was certainly interesting to then find myself with no rear wing at the fastest track on the calendar!

“I’ve got to hold my hands up to a mistake in race three but there is nothing I can do about it now and I just have to put it behind me and come out fighting to Croft next time out. I had two solid podiums there last year in the Ginettas and hopefully we can at least repeat that this time around.”